Help Configuring BlueIntegrator For First Use

After completing the installation of BlueIntegrator, there are several tasks that need to be completed prior to using the system:

Each of these steps is dealt with in more detail below.

To begin the licensing process, run BlueIntegrator Explorer from the BlueIntegrator group in the Start menu. If the software has not yet been licensed, you will be prompted to enter a license key.

After successfully entering a license code, you are prompted to select a BlueIntegrator database. This is the repository that will hold the BlueIntegrator data. By default, a single database is used for configuration, messaging and tracking data, although you can specify separate databases for messaging and tracking if required in your environment. 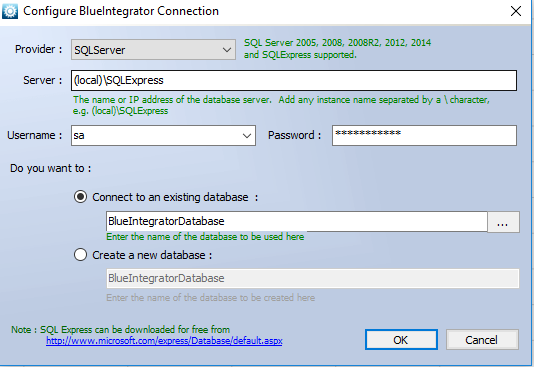 If you are running BlueIntegrator for the first time, you will need to create a new database BlueIntegrator currently supports SQLServer repositories only (SQLServer 2005 or 2008, 2012,2014,  2016,2017,2019 SQLExpress or MSDE). With both SQLExpress and MSDE you should take care to check that your tracking requirements will not exceed the 2GB size limit applicable to both of these platforms.  If you don’t have an available instance of SQLServer, you can download SQLExpress free of charge from Microsoft via the link provided, and you should do this before proceeding.

Enter the server name or address, which can be (local) for the local machine, or (local)\SQLExpress for a local SQLExpress instance, or a resolvable server name or IP address (optionally with an instance name separated by a backslash.  You also need to specify a name for the new database (which defaults to BlueIntegratorDatabase). You can also specify a username and password.

When you are ready, click OK to create the database and continue.

BlueIntegrator should prompt you if no Servers are registered, and offer to help you define a new Server. Without a Server defined, BlueIntegrator cannot do any work. The following form should appear, which can also be seen through the Servers node in the BlueIntegrator Explorer:

The Use Deployed Versions checkbox allows you to lock this server to running versions of Schemas, Maps and Workflows that are flagged as the deployed version. In this way a release Server can continue to run using a flagged version of a resource whilst that resource is being worked upon by developers. You specify the deployed version of a resource by using the Deploy button on the properties form shown on selecting the item concerned in the BlueIntegrator Explorer tree.

It should not be necessary to change the Management Port number from the default of 3899 unless the BlueIntegrator Management Port for the machine on which the Server will run has been modified. An alternative port for a machine can be specified at registry location HKEY_LOCAL_MACHINE/BlueIntegrator/ServicePort.

Click OK, and the Service is ready for action. Right click on the Server, and select Start.  Your system is now ready for use.